Is Training the Cure-All?

When there is a gap between current and desired performance, the cause is often attributed to "the employee's lack of knowledge, lack of skill, or poor attitude.  Remedies typically take the form of training or counseling" (Nickols, 1986, p. 7).  Sometimes training is prescribed as the cure for every performance problem in an organization.  However, there are a number of factors that can either enhance or impede people's performance on the job. If the solution doesn't target the underlying cause of the performance problem, although the problem may be solved in the short term, it will undoubtedly reoccur.  Rummler (2006) asserts,

Gaps in human behavior, performance, and job results never take place in a vacuum.  They always occur in the organizational context of other performers, functions, processes, procedures, systems, policies, and management practices, and the cause of most gaps in jobs and organization results is a function of those many interacting factors.       (p. 989) 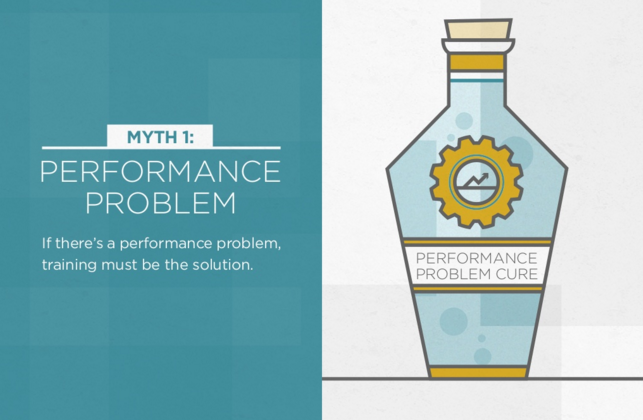 Drilling Down to Root Causes

PERFORMEX uses cause analysis tools like the Six Boxes Model below to drill down to the root causes of gaps between current and desired performance. The three boxes in the top row represent Environmental factors while those on the bottom represent Individual factors that can either enhance or impede exemplary performance.

Although training might appear to be the answer to the performance problems described in the three scenarios to the right, will it actually solve the underlying causes?  Reflect on your own experiences.  What factors have prevented you or your colleagues from excelling in the workplace?  Following a review of the Six Boxes Model below, make some predictions about the underlying factors which are causing barriers to these employees' efforts at high performance.  Then click the + sign to see if you were able to drill down to the root causes of these performance problems. 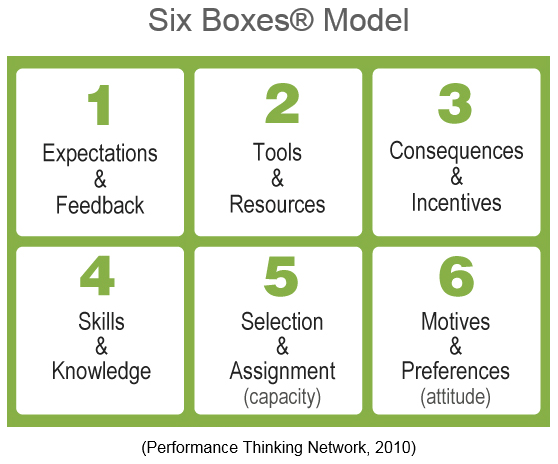 Scenario #1 Symptoms: Marta frequently misses deadlines for completing the tasks assigned to her for team projects.  This negatively impacts the work of her teammates.  Does she need training on the importance of teamwork?

Marta's ancient laptop takes forever to boot up, and frequently freezes, making it impossible to efficiently complete her work.

Scenario #2 Symptoms: The projects Tom produces are never at the standard expected by his supervisor.  Does he need more training on the company's products?

It's hard to hit a target you can't see.  At the outset of a project, Tom's supervisor never takes the time to clearly explain the criteria for success.

Scenario #3 Symptoms: In the past, Linda was always very punctual for staff meetings.  Lately though, her supervisor is annoyed by her repeatedly arriving about 10 minutes after the set start time. Maybe training on attitude in the workplace would help?

Linda's manager always waited until the same two stragglers showed up to begin a meeting; so, Linda decided her time was better spent working in her office rather than showing up on time.

Often when Environmental factors are the cause of performance problems, the solutions have zero cost.  In the examples above, the only cost involved would be for the company to purchase Marta a newer laptop.  However, the return on investment would be on-time deliverables for clients.

Yes, Tom's manager is busy.  However, taking the time at the beginning of each project to really explain to Tom what she wants will save time later on by eliminating the need for multiple revisions.  Blanchard and Johnson (2003) state,

When you assume that people know what's expected of them, you are creating an ineffective form of bowling.  You put the pins up but when the bowler goes to roll the ball, he notices there is a sheet across the pins. So when he rolls the ball, and it slips under the sheet, he hears a crack but doesn't know how many pins he knocked down.  When you ask him how he did, he says, I don't know.  But it felt good. (p. 66)

In Linda's scenario, the wrong behaviours are being rewarded.  By holding up the meeting until the stragglers arrive, the manager is actually rewarding their behaviour; the meeting begins as soon as they arrive.  When Linda, on the other hand, is on time, she receives the negative consequence of sitting around, wasting her time, waiting for the latecomers.  As Mager and Pipe (1976) wisely state, "Water the performance you want to grow" (p. 68). 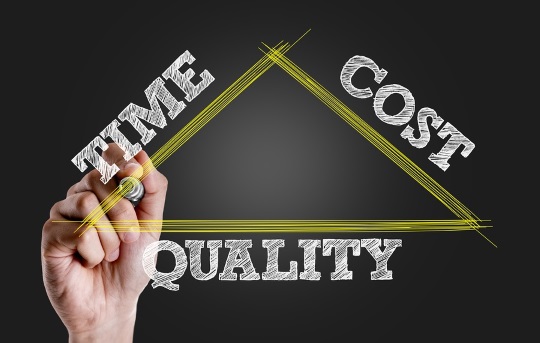 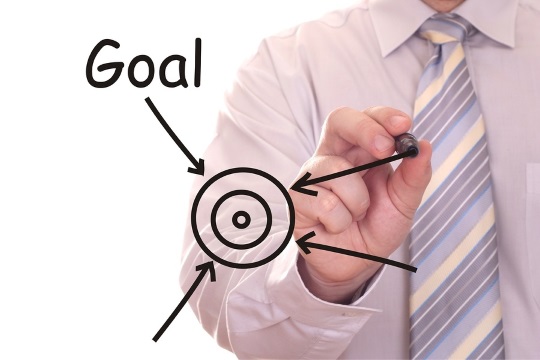 Once the underlying causes of a performance problem have been identified, PERFORMEX will work with you to set SMART goals-- not only at the level of the organization but also "on the floor."  If employees are to contribute to organizational goals, they need to see how what they do every day can have an impact.  Chevalier (2010) states,

The reasonable goal should be stated in terms that the people doing the work can control.  If the overall goal is to improve profitability, the reasonable goal for manufacturing line people should be set in terms of productivity and quality.  Although improvement in these areas will have a positive effect on profitability and market share, production people are better motivated by the things they actually control. (p. 6) 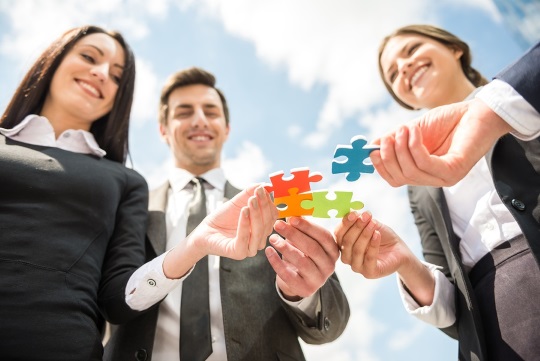 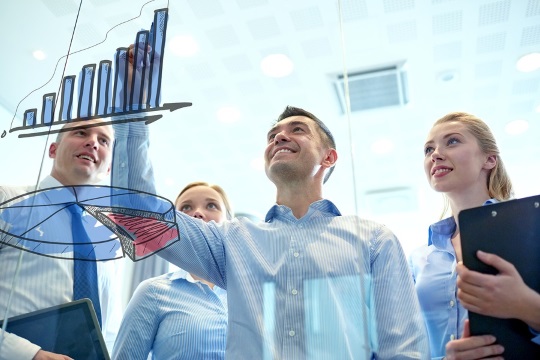 PERFORMEX will work with you to identify existing business metrics that can be used to evaluate the extent to which interventions are having a positive impact in terms of quality, quantity, time, and cost.